5 Ways to Stop Gifting Money to the Markets - Part 1: Learn to Break Even

Consistently lose money as a trader? Game over.

After all, the goal of trading is to generate profits. Like any business, it’s impossible to thrive when your account doesn’t yield positive results from one month to the next. While there are no magic formulas or rules to follow that can guarantee success, there are actionable steps that all traders can take to avoid common pitfalls.

In this five-part series, we’ll explore some of them.

Why Bother Breaking Even?

A breakeven account shows no profits or losses for the day. If it starts with $10,000, it ends with $10,000. While few traders set ‘breaking even’ as a goal, there are several reasons why it makes sense – especially for new traders or those struggling to keep their heads above water.

First, a breakeven account is winning if it’s making enough profits to overcome the bid-ask spread and trading commissions. Futures traders typically look at three prices: the last price, a bid price, and an ask price. The last price is simply the most recent print and the one that you see plotted on the charts.

The bid is the price that buyers are willing to pay, and the asking price is what sellers will accept. The bid-ask spread is the difference between the two. In Figure 1, the bid-ask spread is 0.10 because gold futures are bid 1270.40 and offered 1270.50. 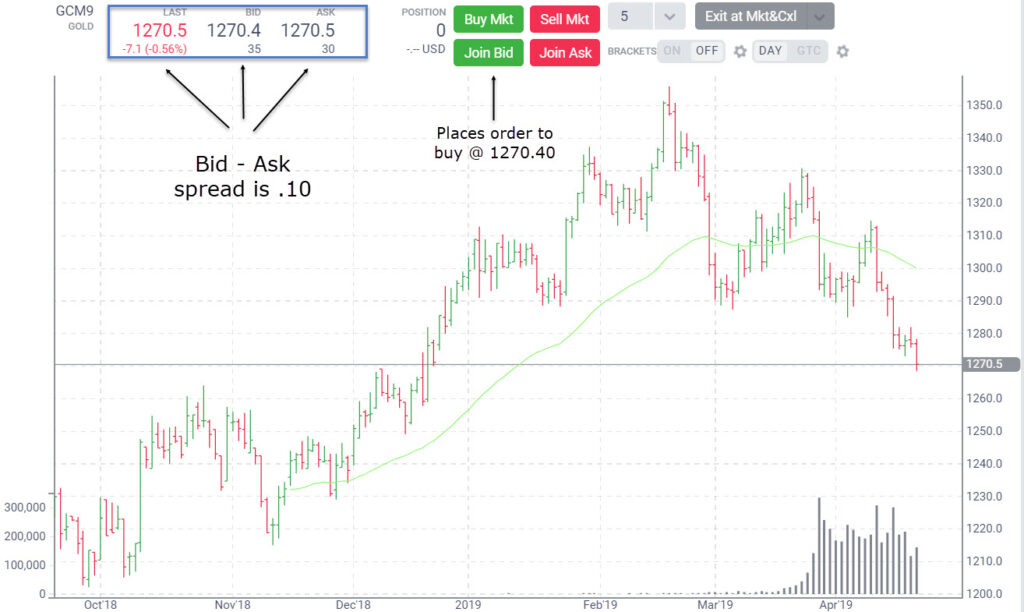 Market orders typically get filled at the bid (or “asking”) price. In other words, the cost of buying or selling at the market is the bid-ask spread. Tight markets typically have narrow spreads, and less active (or “liquid”) contracts can have wider ones.

Tip #1: Join the bid or ask. Rather than placing market orders, consider entering positions by placing orders between the bid and ask (“mid-market”) when possible or by either joining the bid (when buying) or ask (when selling).

Unlike market orders, there is no guarantee the order will be executed and sometimes requires patience. Nevertheless, a trader with a breakeven mindset will be aware of the costs of the bid-ask spread.

Breakeven as a Risk Management Strategy

Consistently breaking even also suggests sound risk management. Few things are more disheartening than scoring a series of winning trades, only to give it all back with one big loser.

Having a breakeven mindset forces the trader to limit the size of one position. For example, if an oil futures trader typically trades ten contracts, they might scale into the position with two five lots or five two lots. When the goal is to break even, scaling rarely makes sense when the first trades show losses.

Tip #2: Be careful when adding to losing positions. One risk of building a position when the market is going in the wrong direction is large losses. On the other hand, building on a long or short that is already profitable can result in sizable gains if the market continues moving the right way.

Lastly, a breakeven trader doesn’t shoot for the stars with one big trade. Each position has a potential risk and reward. The risks are typically viewed in terms of trade size and stops (an order to exit a position at a specific level to stem further losses – more on that next time) and the reward defined by a specific price level or target.

Tip #3: Adjust your stop-losses when you’re right, not when you’re wrong. If the market turns in your favor after entering a position, adjust the stop-loss to protect gains. These types of “trailing stops” will be covered in a later post. The point here: once a stop is in place as a risk management tool, it doesn’t make sense to move it unless it’s to protect profits.

While simply breaking even might seem like a modest goal, it’s a positive step forward for many aspiring traders because it suggests that the account generates enough profits to cover trading costs. The trader is also using sound risk management to avoid big losses.  After all, any business that consistently loses money will shut down. Still, a business that is breaking even can survive over time and then take advantage of the best opportunities when they arise.